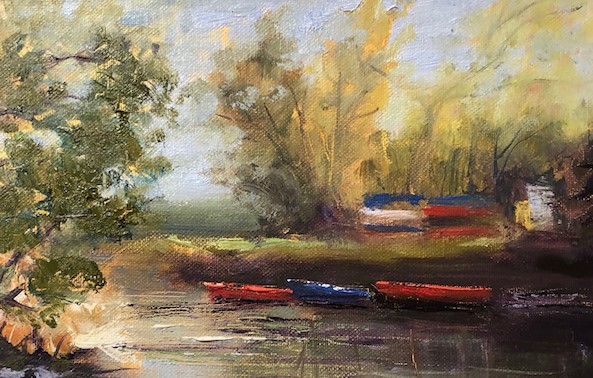 Describing her art as traditional Russian Impressionism with a twist of the sublime, Fatima Young has studied the masters since she was a child and has recently returned to painting after a 25 year hiatus.

After her husband passed, Fatima found therapy in hiking and she used painting to help her heal. The beautiful surroundings of the Pacific Northwest blended perfectly with Fatima’s passion for Plein Air painting. Now she studies nature at its purest and simplest.

Using a palette knife and bold colors to create contrast between light and shadow, Fatima changes the complex forms of nature into simple shapes and strokes, allowing the viewer to imagine the rest. She enjoys letting her “subconscious play around on the canvas capturing the essence of her inner feelings.” For her, it’s all about the journey.

Fatima’s show, Capturing the Moment: A Plein Air Passion, opens at 5 p.m. in the community meeting room at the Bainbridge Branch of the Kitsap Regional Library as part of the community’s First Fridays Art Walk on Friday, October 4th. Fatima’s paintings will be displayed through the end of October.

Her work is currently on display at Bloedel through September, and can also be found on her website: www.FatimaYoungArt.com.