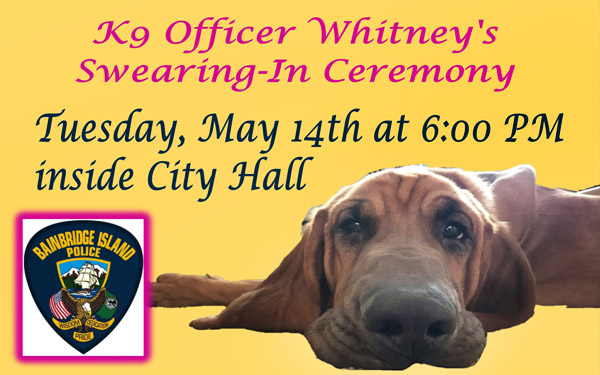 In this, his second in a series of podcasts with BCB, Interim Police Chief Jeff Horn invites us to a swearing-in ceremony for local officers May 14, discusses safe practices for pedestrians and bikers, and shares thoughts on recent events.

National Police Week, which  begins on May 12th, honors policemen nationwide who have died in the line of duty. This year there will be a swearing-in ceremony for local officers — including Officer Whitney, the station’s new bloodhound — at City Hall on Tuesday, May 14 at 6pm. This event is open to the public.

In addition, Chief Horn reminds bikers they’re expected to follow the same rules as cars, and he pays homage to the concerted community effort expended in the recent search for a missing community member with dementia.

Chief Horn has been with the department since 2014 as deputy chief and is now serving as interim chief. If you would like to send in a question for him and the department to respond to in his next podcast, please visit BIPD’s facebook page or contact Carla Sias, Community Resource Officer, at csias@bainbridgewa.gov.

And if you’re interested in joining the Bainbridge Island Police, BIPD is hiring new officers. For more information, visit BIPD’s website at: http://www.bainbridgewa.gov/849/Police-Employment.

COBI Speaks:
The new police station and transportation projects
You, too, can be a philanthropist!