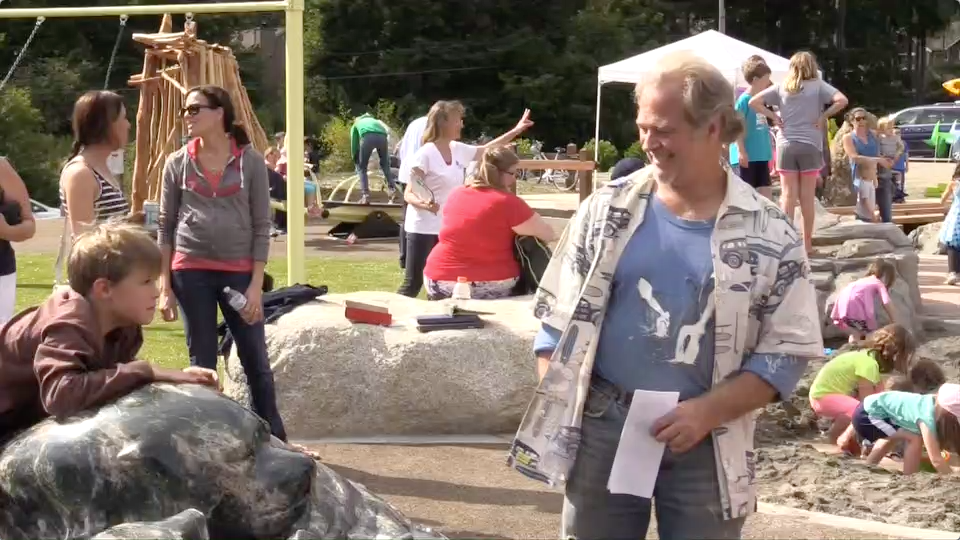 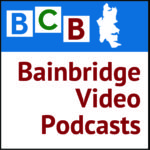 In this 5-minute video podcast, meet artist Andre Pomeroy, a sculptor who quarried, sculpted, polished and installed a remarkable 3-ton boulder-sized rendition of a family of four sea lions. His art is now a favorite climbing object for children at play at the innovative and inclusive “Owen’s Playground” on Bainbridge Island.

The park’s name is in memory of the son of Kelsey and Stacy who passed away at age 6 in 2013, of complications associated with cerebral palsy.

In his video conversation with BCB’s Channie Peters, Andre explains that he had the four-member Marshall family in mind when he rendered the four sea lions in the boulder — representing mom and dad (Stacy and Kelsey), plus Owen and his brother Elliott. As he explains to Channie, when he showed the work to Stacy and told her about her four family members being represented in the stone, she cried … and he cried.

Andre explains that the suggestion came from Stacy that he create a sculpture large enough for children to climb on. As you’ll see in this video, during our filming of the interview, one child after another approached and was drawn into the massive sculpture. One after another, they climbed on the sea lions, embraced them and played on them — all in an entirely spontaneous and unrehearsed way.

The animals depicted by the artist are Steller (sometimes called Northern) sea lions, with large strong facial features. The artist named the work “Love’s Safe Harbor”, and you can find those words carved into the hard striated patterns of the beautifully patterned Serpentinite stone that came from the sculptor’s own quarry in Marblemount, Washington.

Andre estimates that the physical chiseling and carving of the massive boulder involved at least 100 hours of physical labor, but the hours devoted to envisioning the design and other preparations and subsequent installation are many times that number. Andre reports that this is his largest work, although he mentions that he created a large sculpture some years ago for John Denver depicting a whale and a giant squid in a dramatic encounter.

In this podcast conversation, you can hear Andre’s happiness at being able to bring his artistic work to such a joyful public place where it is being enjoyed by so many children and people of all ages.