On Wednesday November 19th at 7 pm Jenkinson will perform as Jefferson at the Bainbridge Island Museum of Art Auditorium, offering a monologue in character, Q&A in character, and then answering questions as himself. 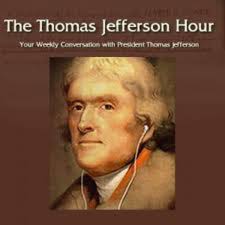 Jenkinson, who is considered one of the most entertaining public speakers in the United States, has lectured about and portrayed Jefferson in 49 states over the last 15 years. He is host of the nationally syndicated National Public Radio show “The Thomas Jefferson Hour,” a program dedicated to the traditions of Thomas Jefferson: civil discourse, critical thinking, and good citizenship.

Mr. Jenkinson has appeared as himself in Ken Burns’ “Thomas Jefferson,” and, more recently, as an authority on Theodore Roosevelt in “The Roosevelts: An Intimate History.” He is also the  author of “Becoming Jefferson’s People: Re-Inventing the American Republic in the Twenty-first Century.”

Come to this event to experience living history and interact with the author of the Declaration of Independence. Tickets are on sale now and can be purchased online at www.bainbridgehistory.org/events, by phone at 206-842-2773, or in person at the Historical Society Museum (215 Ericksen Ave. NE). The cost is $100 per person. Hors d’oeuvres and beverages will be served at 6:15 pm.