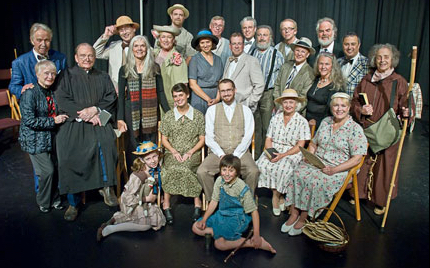 In this podcast, Island Theater board member and co-director Rozzella Kolbeggar tells the story of this weekend’s production of “What Women Have to Say”.

The script-in-hand dramatizations take place at the public meeting room of the Bainbridge Public Library, on Saturday December 20th and Sunday December 21st at 7:30pm.

The Island Theater show this month is an evening of scenes and monologues by, for, and about women. Adapted and directed by Diane Bankart and Rozzella Kolbegger, the offerings range from a very different kind of crazy cat lady to a human resources staffer with some wild stories; from a park ranger giving an unusual tour of Mount Rushmore to an actress who finds a sneaky way to score at an audition; and some Holiday funnies thrown in for good measure.

Rozzella also invites you to save the date – the third weekend in February – for a revival of one of Island Theater’s most widely recognized shows: “Dear Editor”.  It consists of dramatic readings of actual letters sent to the editor of the Bainbridge Review, including several from the era during World War II when the Review editor took courageous positions condemning the internship of Japanese-Americans from Bainbridge Island.

Island Theater shows are performed for no charge, but a donation is gratefully accepted. More information can be found on the Island Theater website.