Bainbridge Island’s very talented actors and writers are showcased in the Fifth Annual One Act Festival – “Fifty Shades of Funny.”

In this podcast, director Dinah Manoff tells us about the origin of this popular festival of short plays written by well-known playwrights as well as by three local writers. 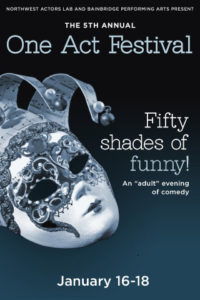 These are performed by an extraordinary array of 32 of her talented students, many of whom are familiar to regular BPA theatre fans.

This year, the plays are eclectic, racy, entertaining, and all very funny.

There are 11 one-act plays:

There are just three performances from January 16-18, plus the “pay-what-you-can” preview on Thursday, January 15th. Tickets are on sale now at the BPA website.