Podcast: What’s Up Bainbridge:
Ranger and the ‘Re-Arrangers’ performing locally in March 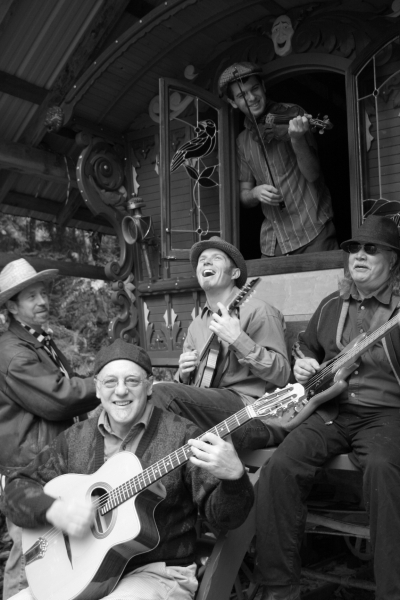 The subject of this podcast is the local “gypsy jazz” band — Ranger and the ‘Re-arrangers’. They evoke the spirit of a Paris cafe and the raucous energy of a gypsy campsite.

At the heart of their sound is Ranger Sciacca’s violin.  The band’s repertoire includes swing standards, traditional gypsy melodies, the music of Django Reinhardt, and Ranger’s unique originals.

Ranger and his father Michael formed the group in 2006, after returning from a Django Reinhardt festival in France. In the years since, the band has released 3 CDs and played over 500 shows.

Violinist Ranger Scacca is at the heart of their sound. He and his father are descendants of Sicilian immigrants who played jazz in New York early in the 20th century. Ranger began playing violin at the age of six.

The band includes two guitarists including his father Michael, a percussionist, bassist, and 5-string mandolin.

Ranger and the ‘Re-Arrangers’ will be performing on Bainbridge on Friday, March 6th at the Island Gallery, 400 Winslow Way East, during the 6-8pm  ArtWalk. No charge.

Then, at 7pm on Saturday, March 21st, they will perform at BIMA — the Bainbridge Island Museum of Art auditorium. This performance will also feature renowned guitarist Neil Andersson.

In 1993, Andersson co-founded the seminal gypsy jazz band Pearl Django, eventually recording 10 albums with the group. He is one of the Northwest’s premier guitarists, and was elected to the Northwest Music Awards Hall of Fame.

The BIMA concert will feature selections from the Ranger and the ‘Re-arrangers’ repertoire of American swing standards, traditional gypsy melodies, and the music of Django Reinhardt. Violinist Ranger Sciacca will provide the counterpoint to Andersson’s guitar.

Admission is by donation and space is limited. For reservations, email the band. Find information on the band’s website.