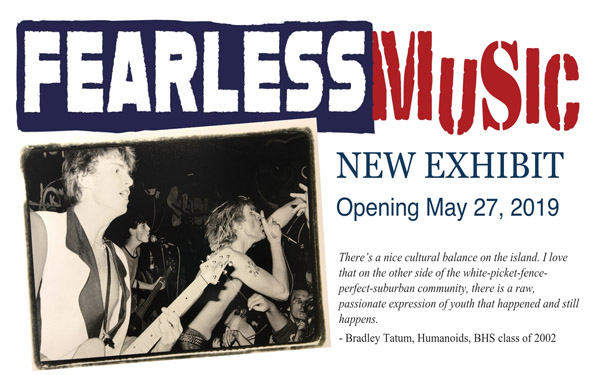 Did you know Seattle Grunge Rock Bands had their roots on Bainbridge Island? Learn more about the BI teen music scene at the Historical Museum’s Fearless Music exhibit, opening May 27th!

Fearless Music, an upcoming exhibit at the Bainbridge Island Historical Museum (BIHM), celebrates the independent teen music scene on Bainbridge from 1980 to 2018.

While many people are familiar with Seattle’s grunge scene, they may not know that many other accomplished bands emerged from the island.  During the nearly four decades covered by this exhibit, the Island served as a breeding ground for creative, curious, and resourceful youth whose music has influenced regional and national sounds. Their bands covered genres ranging from punk to rock to heavy metal and more, but all shared the theme of a dedicated do-it-yourself approach.

Listen here as BIHM Executive Director Brianna Kosowitz and Guest Curator Merilee Mostov talk about these hard working teens who composed and produced their own music, booked and managed their own concerts on and off island, and designed their own graphics and fanzines.  They also describe some of the interesting artifacts on display and give details about this truly interactive exhibit.